I apologise to readers for the lack of posts over the last couple of weeks or so but I've been on a music-filled holiday. Firstly, a guest ticket to Cambridge Folk Festival thanks to Ross Couper & Tom Oakes' need for a driver. The Scots and the Irish stole the show, and a complete surprise for this uber-traditional Duke of Dreich was to find myself rocking my bits off in company with around three and a half thousand mainly English people of all ages to Sketch, whose line-up included the amazing Ross Ainslie on pipes and Techno-Trad Rock Godess wee Hannah Beaton on vocals. It's not the kind of thing I'd listen to in the house, but jings it's great for a party.  Orcadian band The Chair closed the show in grand style and was joined on stage by the delightful Bella Hardy, for whom I traded Ross Couper for the journey home.

It was one helluva drive from Cambridge to Sabhal Mor Ostaig in Skye last Monday, largely fuelled by obscene amounts of nuclear coffee, Irn Bru, laughs with Bella and Tom (as far as Edinburgh) and the achingly beautiful Pipes & Strings Suite for Alan CD.  If you don't own a copy, click the link and part with £12 +P&P. I guarantee you won't be disappointed.

So I arrived a day late for Margaret Stewart's Gaelic Songs of Drink and Revelry course. Catching up was an experience as I was finding it difficult to function as a human being and in my first language of English, having had barely 3 hours of sleep a night camping at Cambridge.  There's something wonderfully Scottish that in this country for a few hundred quid, a pub chanter like me can spend a week in one of the most beautiful parts of the country being coached by one of the top traditional Gaelic singers, indeed one of the top singers in the world in any language.  If you're a Gaelic learner like me, there's no better way to learn the pronunciation and rhythms of this essentially musical language.  Even if you're just a music lover without the time or inclination to learn Gaelic, you'd still find the week great value.

The highlight for me was not the trip to the Talisker Distillery, ticketyboo though that was.  Nor indeed was it the frequent drinking and revelry practicals throughout the week, fun though they were.  I'd asked Margaret to include An Clàrsair Dall's Oran Mòr MhicLeòid and she saved it up for the Friday. The beauty of her magisterial rendition had this hard-bitten (though admittedly big, soft) auld shyte welling up. It's now over 60 years since Marietta MacLeod was recorded giving the Oran Mòr MhicLeòid (excerpt) by Hamish Henderson at the Edinburgh People's Ceilidh, so we're long overdue a fresh and less "hands clenched tightly under the bosom" operatic recording.

I'm also hoping Margaret can reconcile her reservations regarding sacred music on a secular CD with her duty for the preservation of her mesmerising solo interpretations of the Psalms by recording The Royal Wedding Psalm and The Victory Psalm. As she was telling us the singing of Gaelic Psalms is even declining in Back Free Church on Lewis, I pray that preservation wins out.  I first heard her sing The Victory Psalm around 15 years ago in the Reid Concert Hall in Edinburgh accompanied by Allan MacDonald on the small pipes.  The audience was stunned into enraptured silence and it was nigh on a full minute before a tentative ripple of applause brought everyone out of their rapture to raise the roof in appreciation.

So after a week and a half of some of the finest music and culture these islands and beyond have to offer, imagine my reaction on being sent a link to the BBC's latest prime-time Saturday entertainment: I Love My Country. Imagine my further reaction to finding that this Z-list Sleb-filled, Cockney Chavtastic, Engfest pretending to be a Britfest of an excrescence onto the airwaves is apparently produced by BBC Scotland.

Given that I work in the health service I feel duty bound to issue a cerebral advisory health warning before you click on the link.  Watching that has the same effect as shoving a liquidiser up your nose and feeling your brains dribbling from your ears. Jeez, Frank Skinner must have lost out big time in the financial crisis to be reduced to this.

For those who daren't risk exposure to this electromagnetic excrement, take the map game for example. The Slebs are invited to place a Yorkshire pudding on a map of the UK as close as possible to a nominated place, and what a map it is: 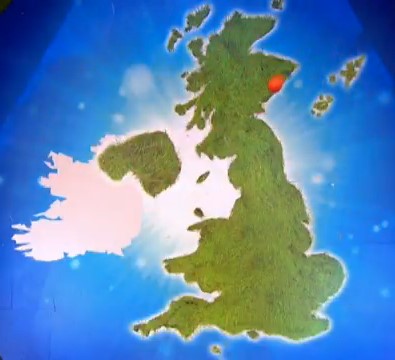 Shetland and the Northern part of Orkney are a new archipelago off the East coast of Scotland, the Channel Islands have migrated North and who knows what the hell is going on on the Western Seaboard of Scotland? Mull appears to have merged with the mainland and I'm not sure if the appendage below it is meant to be Islay and Jura or if that longstanding BBC measure of televisual penile decency, the Mull of Kintyre has got excited and acquired some epididymal cysts.

The Irish Sea appears to be depicted (possibly accurately) as some white nuclear contamination zone emanating from Sellafield and the disproportionately large 6 counties of Northern Ireland appear to be balanced by the fact that some putative Trident nuclear accident has wiped most of Co Donegal from the map.

At first I thought this dumbed-down, puerile crap was aired after closing time à la OTT, but it may as well be aired at prime time as there's not enough alcohol in the world to make this programme remotely funny or entertaining.

I'm biting the bullet now and changing to watching catch-up services only, for which you don't need a TV licence as I'm not prepared to fund crap, relentless unionist propaganda or indeed hordes of BBC Executives paying each other telephone number salaries.  The £145.50 will be far better spent on one of next Summer's courses at Sabhal Mor Ostaig. 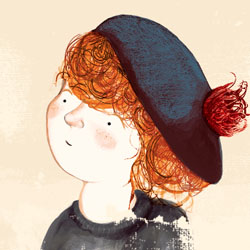 Viewing "I Love My Country" has however removed any vestige of a reservation I might have had about going to see The Boy and The Bunnet again, despite not having a kiddie in tow. Billed as being suitable for folk of age 3 upwards, Scotland's take on the basic idea of Sergei Prokofiev's Peter and the Wolf, with some of our finest players and their traditional instruments taking the part of characters in the endearing story is far more adult, cerebral and enjoyable that the previously discussed BBC prime time alleged family entertainment. I would highly recommend it for the music alone, but the whole package is a fine way to escape the lunacy of Edinburgh at Festival time for an hour.

The Boy and the Bunnet Animated Introduction from Big Sky on Vimeo.

Email ThisBlogThis!Share to TwitterShare to FacebookShare to Pinterest
Labels: Music