How Long has the Gorbals Goebbels Got?

I sincerely hope Ian Taylor's company Vitol got good value for money for the $1M dollars he paid Serbian war criminal Arkan, because Taylor must be despairing for the £500,000 he donated to Better Together, the self-styled Project Fear.

It's now nearly 2 weeks since Alistair Darling, Better Together chairman, had yet another relaunch promising to enunciate the positive case for the Union. However, not only was his thunder stolen by the MoD revealing plans to annexe Faslane / Coulport, but the promised positive relaunch turned out to be the same old collection of scare stories gathered together in probably the most mind-numbingly boring document produced in the independence referendum campaign so far.

Probably hoping to draw attention away from the fact that his more usual fare is getting paid £10,000 to speak at dinners for healthcare privatisation companies, Darling was keen to promote his 'Patriotic Scot' image and be photographed with a packet of porage: 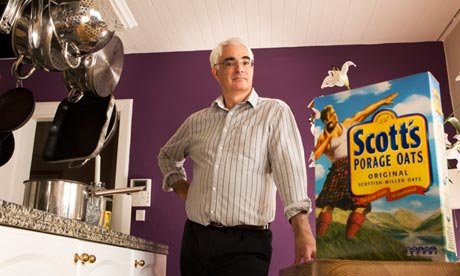 It might have been rather more convincing had the packet actually been opened. In any event, I doubt he appreciated the hatchet job that accompanied the photo in The Observer's piece by Kevin McKenna: Scottish Nationalists can rest easy, given the opposition.

However, Alistair is singularly safe in his Chairmanship. He is, after all, the only Labour has-been (ever was?) keen to be seen sucking up to the Tories.  It is also handy that his successor as UK Chancellor, George Osborne, is the real head of Better Together.  The rest have hived off into United with Labour which, after its launch, seems to have disappeared. It's probably hiding under the same rock Johann Lamont has been hiding under since the Falkirk Labour Candidate selection crisis reared its head.

No, with Better Together / Project Fear now being wholeheartedly derided by Dependents as well as Independents, the jacket of the Chief Executive Blair McDougall, the Gorbals Goebbels, must be on an extremely shooglie peg. 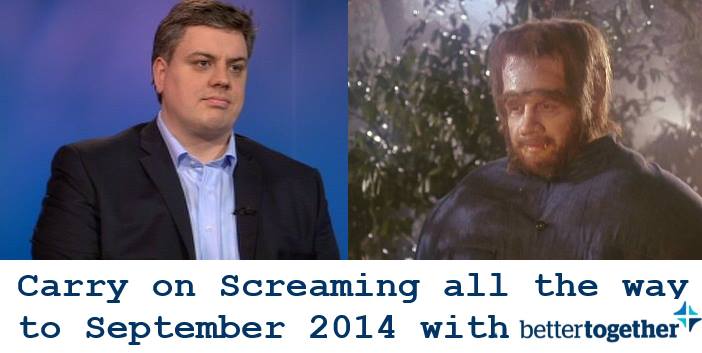 For over a month now it has been more than apparent that the Project Fear strategy has been received by the Scottish public rather more like Carry on Screaming, and McDougall's passing resemblance to the comedy horror character Oddbod doesn't help.  Even as late as yesterday, his whole energy was spent making a mountain which only the terminally obtuse could possibly have made from Alex Salmond's analogous likening of £1.5Tn to £300,000 for every person in Scotland in an attempt to make such an infeasibly large number understandable.  To erect that analogy into a Straw Man 'pledge' to give every Scot £300,000 shows that there's not a positive bone in McDougall's body.

We also got an insight into the internal workings of Project Fear with their launch video for Blether [sic] Together.  Standing for the moment that their 'grassroots' campaign has a national regional organiser (sounds more astroturf than grassroots to me), we got to meet the man himself, only to find that Rob Murray has all the charisma of a second rate Betterware salesman.

How long will the Better Together / Project Fear Tory donors put up with their money being squandered on second rate Labour hacks: One trick dead ponies like McDougall and Murray?  Not long, I think. Especially as their one trick is now not only not working, but has become comedy gold.

Perhaps I was being unfair in calling McDougall the Gorbals Goebbels. Unfair to Dr Goebbels, that is. Goebbels could deploy subtlety in the propagandist's art. McDougall doesn't even know what the word means.

It appears that I may have struck a nerve. Blair McDougall seems to be having a touch of the Calmans. 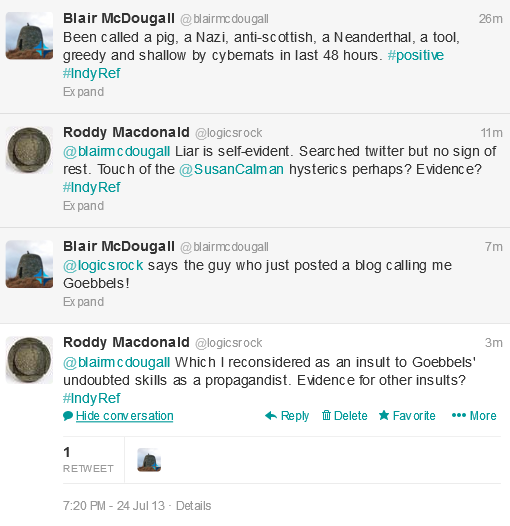