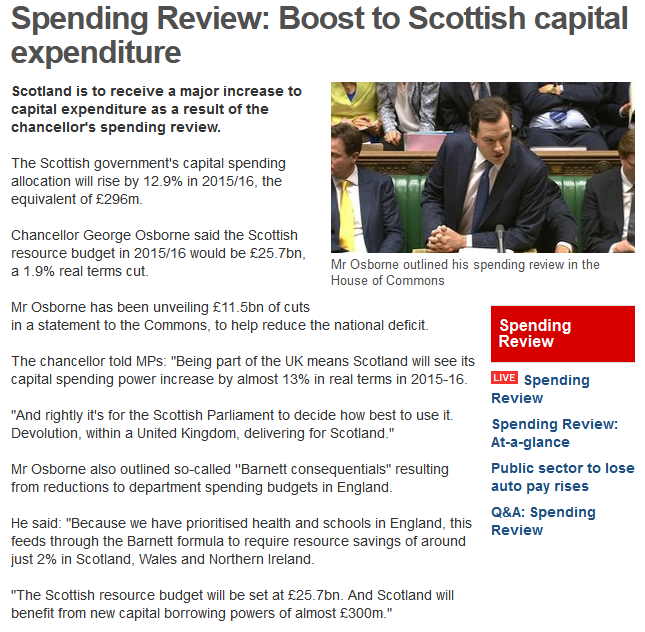 Wahey! Look at that headline! The Benificent Union is boosting Scottish capital expenditure by £296M while it slashes and burns the rest of UK spending, except intelligence & security and international development (bungs to third world dictators for buying British arms) in 2015-16.

Are we not indeed Better Together? Hang on a minute, read the small print and the Scottish Government's annual budget will be cut in real terms by 1.9% which works out at £488.3M to £25.7Bn, while it will be given the power to borrow £296M for capital spending.

BBC Scotland, taking Newspeak to new levels of doublethink. I imagine their masters are happy. 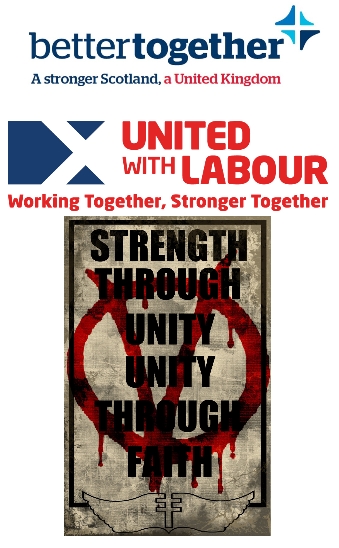 BBC Scotland reminds me of the Tannoy in an 'End of the Soviet Era' Russian joke which likened the Russian People to passengers on a train.

Essentially Lenin had exhorted the passengers to collect coal and water and the train chuffed along nicely. When the train ground to a halt, Stalin flogged the passengers until they had collected enough coal, wood and water to keep the train moving. Eventually Gorbachev came along, opened the curtains of the carriage and saw that the train wasn't actually moving and hadn't moved for some considerable time.

He went up to the rusting hulk of the locomotive and found the corpses of Kruschev, Brezhnev and Andropov sprawled round an old drum kit and microphone linked to the train's tannoy with Chernyenko feebly tapping out Rat-a-Tat-Tat, Rat-a-Tat-Tat.

Let's be thankful that Scots have the ability to get off the UK's train now that the undifferentiable Camosbmilliballs has the drumsticks.