It's been a bitch of a couple of days at work, so it was really nice to come home to a life-affirming message from a friend, and messages don't come much more life-affirming than "Congrats! You're hated by the Scottish Daily Mail" (again)! Not just ordinary Daily-Hated either - an article and a feature box on page 2 no less and a leading article to boot!

It's a great testament to how far we've moved on that being a Cybernat is more Daily-Hateworthy now than being a Military Poof was in the mid-90s. Happy days!

Readers are, of course, free to look for themselves both on this blog and at my @logicsrock Twitter account for any evidence of material that is "vile behaviour", "online football hooliganism" (I like that one as a gay chap who wouldn't know one end of a football from another), "aggressive", "anonymous", "bile", "gratuitous insults" or "crass".

I like that they are particularly upset that Brendan Hynes likened Alistair Carmichael to Goebbels. I once likened Blair MacDougall to Goebbels, but reconsidered it within the body of the same article as an insult to Dr Goebbels' undoubted skills as a propagandist. They also seem to be rather upset that someone called someone else a Nazi.  This from the paper that published this on 20 Aug 1938: 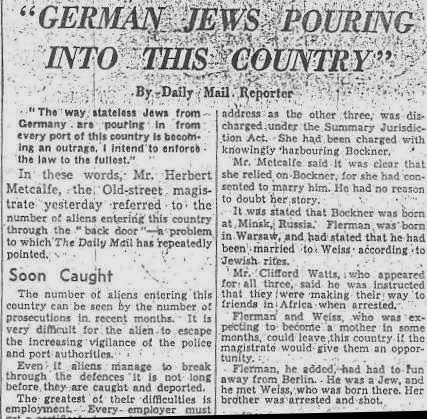 So Anas "Can't be arsed to vote against the Bedroom Tax" Sarwar is going to write to the First Minister? Whoop-diddly-doo-dah! I also wonder if the Noble Lord Foulkes of Glenfiddich finds slagging off Cybernats as satisfying as drunkenly twatting Police officers?

Anyhoo, thank you for the free advertising, Scottish Daily Mail and, dear reader, if you promise to give your eyeballs a good rinse afterwards, you can read it all below.

Salmond under pressure to curb attacks of anonymous ‘Cybernats’ 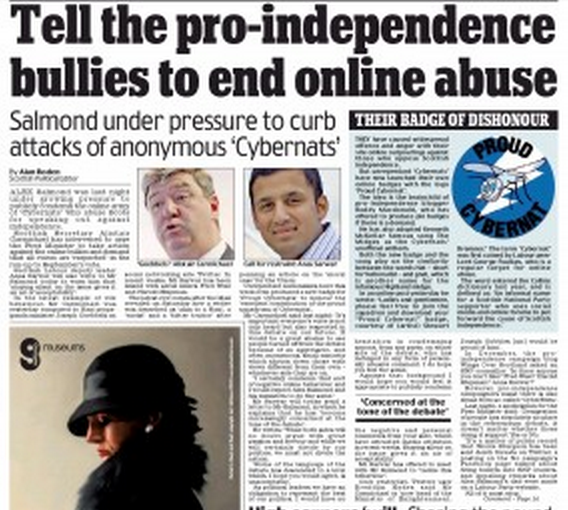 ALEX Salmond was last night under growing pressure to publicly condemn the on-line army of ‘Cybernats’ who abuse Scots for speaking out against independence.

Scottish Secretary Alistair Carmichael has intervened to urge the First Minister to take action against the online bullies and demand that all voices are ‘respected’ in the run-up to September’s vote.

Scottish Labour deputy leader Anas Sarwar will also write to Mr Salmond today to warn him that ‘staying silent on the issue gives it an air of acceptability’.

The latest row comes after the Mail revealed on Saturday how a writer was described as ‘akin to a Nazi’, a ‘racist’ and a ‘ bitter traitor’ after penning an article on the ‘moral case’ for the Union.

Unrepentant nationalists have this week even produced a new badge for ‘Proud Cybernats’ to honour the ‘excellent contribution of the proud squadrons of Cybernats’.

Mr Carmichael said last night: ‘It’s important everyone’s voice is not only heard but also respected in this debate on our future. It would be a great shame to see people turned off from the debate because of an aggressive, and often anonymous, small minority which shouts down those with views different from their own – whichever side they are on.

‘I certainly condemn that sort of negative online behaviour and I would expect Alex Salmond and his ministers to do the same.’

Mr Sarwar will today send a letter to Mr Salmond, in which he explains that he has ‘become increasingly concerned at the tone of the debate’.

He writes: ‘While both sides will no doubt argue with great passion and fervour and while we will certainly divide by our politics, we must not divide the nation.

‘Some of the language of the debate has descended to a level which, I hope you would agree, is unacceptable. ‘As political leaders we have an obligation to represent the best of our politics. I would have no hesitation in condemning anyone, from any party, on either side of the debate, who has indulged in any form of personally abusive comment. I do hope you feel the same.

'Against that background I would hope you would feel it appropriate to publicly condemn the negative and personal comments from your side, which have attracted media attention in recent weeks. Staying silent on the issue gives it an air of acceptability.’

Mr Sarwar has offered to meet with Mr Salmond to ‘tackle this behaviour’. Only yesterday, Twitter user Brendan Hynes said Mr Carmichael is ‘now head of the Ministry of Enlightenment, Joseph Gobbles [sic] would be proud of him’.

In December, the pro-independence campaign blog Wings Over Scotland asked an SNP councillor: ‘Is there anyone you don’t like? Fred West? Harold Shipman? Anas Sarwar?’

However, pro-independence campaigners insist there is also abuse from so-called ‘CyberBrits’. Last night, a spokesman for the First Minister said: ‘Denigration of people has absolutely no place in the referendum debate, it doesn’t matter whether those doing it support Yes or No.

‘It’s a matter of public record that Nicola Sturgeon has been sent death threats on Twitter, a posting on the No campaign’s Facebook page talked about firing bullets into SNP leaders, and appalling remarks about Alex Salmond’s dad were made on a Labour Party website.

THEIR BADGE OF DISHONOUR 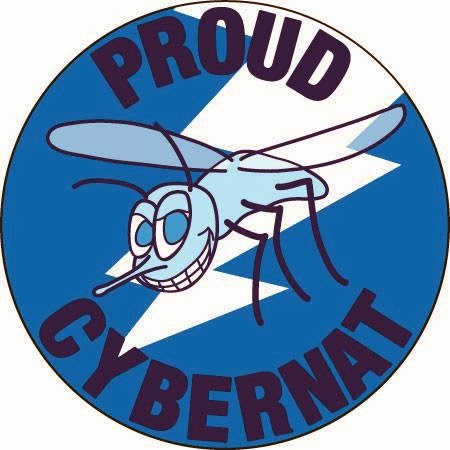 THEY have caused widespread offence and anger with their vile online outpourings against those who oppose Scottish independence.

But unrepentant ‘Cybernats’ have now launched their own online badges with the logo ‘Proud Cybernat’.

The idea is the brainchild of pro-independence blogger Roddy Macdonald, who has offered to produce pin badges if there is a demand.

He has also adopted Kenneth McKellar [sic] famous song The Midges as the Cybernats’ unofficial anthem.

Both the new badge and the song play on the similarity between the words Nat – short for Nationalist – and gnat, which is another name f or the infamous Highland midge.

In an online post yesterday he wrote: ‘Ladies and gentlemen, please feel free to join the squadron and download your “Proud Cybernat” badge.’ The term ‘Cybernat’ was first coined by Labour peer Lord George Foulkes, who is a regular target for online abuse.

The word entered the Collins dictionary last year, and is defined as: ‘An informal name for a Scottish National Party supporter who uses social media and online forums to put forward the cause of Scottish independence.’

THEY are reviled for their bile and gratuitous insults for anyone who does not share their views on independence, but are the Cybernats repentant?

Not in the slightest, of course, and the latest crass stunt by these online equivalents of football hooligans is to adopt a logo displaying Scotland’s most unpopular wildlife species – the midge – and the slogan ‘Proud Cybernat’. that is an oxymoron to anyone who values civilised democratic debate.

Yesterday we reported that senior Labour, Tory and Lib Dems figures were calling on Alex Salmond to staunch the rabid torrent of abuse from his digital foot-soldiers. Today Scottish Secretary Alistair Carmichael joins the growing clamour for action from Mr Salmond, who is not just the leader of the SNP but also the head of the Scottish Government. By failing to disown Cybernats whose idea of debate is to liken those who disagree with them to such monsters as Fred West, Harold shipman and Joseph Goebbels, the First Minister is neglecting his duty to safeguard civility in political conversation. Mr Salmond should make a personal statement unreservedly condemning Cybernat offensiveness. He was vocal in condemning online sectarianism: he must break his silence on this cyber-abuse which demeans scottish public discourse.

To bring you back to the real world, enjoy The Daily Mail Song from Dan & Dan (Hat tip to Grant Simpson).

You can view the article that caused all this hypertension here: Get your Proud Cybernat badges here.
Posted by logicsrock at 20:00